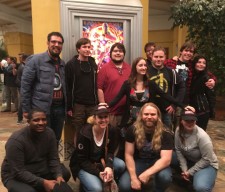 The cast and crew screening was held Wednesday, April 25, at the Regency Village Theater.