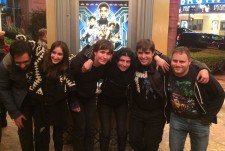 SHERMAN OAKS, Calif., February 14, 2018 (Newswire.com) - Once again, the special relationship between autism and Marvel Super Heroes was evident at the cast and crew screening of Marvel Studios’ latest movie "Black Panther," which was attended by the visual effects artists from Exceptional Minds Studio.

"Black Panther" is the latest Marvel Studios movie for the artists at Exceptional Minds Studio, the only visual effects and animation studio staffed entirely by professionals on the autism spectrum.

The screening was held Monday, Feb. 12, at the Regency Village Theater. During previous screenings for Marvel Studios films, Marvel Studios Executive Vice President of Physical Production Victoria Alonso applauded the work done by Exceptional Minds and encouraged others to learn from the studio’s example.

Since opening its doors almost four years ago, the small studio has done tracker marker removal, split screen, green screen keying, and rotoscoping for compositing as well as end title credit work and animation for more than 50 major motion pictures and/or television series. “Star Wars: The Last Jedi” and “The Good Doctor” are recent additions.