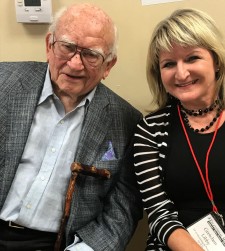 Exceptional Minds is a nonprofit vocational school and working studio preparing young men and women on the autism spectrum for careers in animation and visual effects.

Collaborating with these talented artists and supporting Exceptional Minds' critically important mission ... I'm thrilled to be here to celebrate you all.

Among Open House attendees was Gretchen Libby, the vice president of marketing and production for Industrial Light & Magic and this year’s recipient of the Exceptional Minds Ed Asner Award. The award is named after the school’s most notable founding advisor and presented annually to someone in the industry who has become a champion of Exceptional Minds.

“It is truly an honor to receive the Ed Asner Award,” said Libby, who is the sixth recipient of the award. Ed Asner, Sam Nicholson of Stargate Studios, Victoria Alonso of Marvel Studios, Holly Schiffer of HBO and Robert Sorcher of Cartoon Network are previous awardees. There to watch Libby accept the award was Ed Asner himself. Libby worked with the Exceptional Minds Studio and artists on Star Wars: The Last Jedi, Downsizing and recent film Solo: A Star Wars Story. “The quality of the work we consider to be on par with others that have been doing this for many, many years. They had a broad spectrum of work and they did an incredible job as the work got harder and harder,” said Libby.

“Collaborating with these talented artists and supporting Exceptional Minds' critically important mission ... I'm thrilled to be here to celebrate you all,” she added.

“I am sure I speak for all of us at Exceptional Minds when I say that working on Star Wars: The Last Jedi was the highlight in our organization. Gretchen, thank you for awakening the force within us all,” said Exceptional Minds Studio Executive Producer Susan Zwerman.

“I don’t think my younger self would believe me if I told him that he’d eventually get to actually be a part of the movie-making process,” commented 2018 Exceptional Minds graduate Thomas Harmonson. “VFX just kind of clicked in my brain. It is fun, challenging and logical with a little bit of creativity,” added graduate Isaiah Strum. Thomas and Isaiah join 14 other Exceptional Minds animation and visual effects professionals who have worked on projects for Marvel Studios, Sony Pictures, HBO, 20th Century Fox, Paramount, Universal, Warner Bros. and Industrial Light & Magic, among others. “Both animation and visual effects can be very challenging work. In the case of visual effects, for example, each shot is like a puzzle. These guys just love that challenge of trying to figure out the best way to approach a shot and are very detailed oriented,” explained Zwerman, who is well-known in the industry as a visual effects producer and the co-editor of The VES Handbook of Visual Effects: Industry Standard VFX Practices and Procedures. She is a longstanding member of the Academy of Motion Picture Arts & Sciences, the Directors Guild of America, the Producers Guild of America and the Visual Effects Society.

The Open House also saw the unveiling of the studio’s new 1,561-square-foot addition with 11 new animation workstations, more than doubling its working space for growing its animation business. Exceptional Minds Animation Studio recently completed animation projects for Special Olympics, Los Angeles Zoo, Open Hearts Foundation, CBS TV and BJ Lederman. “We’re living the dream. We have a new space and we’re on our way to becoming a viable option for our students – a working, nurturing, fun, cartoon studio that can provide a livelihood and therefore a life for our artists with autism,” said Exceptional Minds Studio Animation Creative Director Howie Hoffman, who is well-known in the industry as an expert animator and art director for studios such as Nickelodeon, Warner Bros. and MTV.

Currently, the majority of the nation’s 3.5 million people with autism are unemployed or underemployed, according to government statistics. More than 500,000 U.S. children impacted by autism will enter adulthood during this decade, with one in 59 to follow. 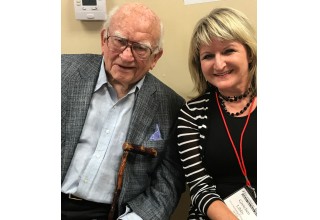 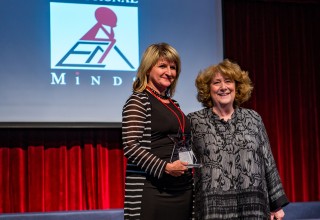