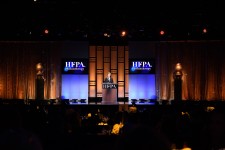 This year's HFPA Grants Banquet is number four for Exceptional Minds, which prepares young adults with autism for careers in visual effects and animation.

SHERMAN OAKS, Calif., August 13, 2018 (Newswire.com) - Exceptional Minds was among the 80 nonprofit recipients awarded a grant during one of Hollywood’s biggest charitable events of the year, the Hollywood Foreign Press Association’s (HFPA) annual Grants Banquet held at The Beverly Hilton in Beverly Hills, Calif.

The HFPA, which hosts the annual Golden Globe® Awards, presented $3.25 million to entertainment-related nonprofit organizations, academic programs and humanitarian efforts on August 9. This year’s HFPA grant was number four for Exceptional Minds, the industry’s only school and working studio for young adults with autism pursuing careers in the digital arts. The $25,000 HFPA grant will aid in the creation and construction of Exceptional Minds’ new animation studio and apprenticeship facilities. Previous graduates of the Exceptional Minds three-year vocational program have gone on to work on visual effects for more than 50 movies, including "Star Wars: The Last Jedi" and "Black Panther."

We owe our success to the support we receive from the industry and especially our friends at the HFPA.

"We owe our success to the support we receive from the industry and especially our friends at the HFPA," said Lupe Ramos-Silva, Development Director for Exceptional Minds, located in Sherman Oaks, Calif.

More than 500,000 U.S. children impacted by autism will enter adulthood during this decade, with one in 59 children to follow. The vast majority of adults with autism are unemployed or underemployed. Young adults with autism have the lowest employment rate of anyone with disabilities.

For 75 years the Association’s mandate has been to give back. The HFPA has donated over $33 million to entertainment-related charities, scholarship programs, and humanitarian efforts. Licensing fees obtained from the annual Awards show has allowed the HFPA to support over 80 nonprofits. These charities focused on education in film and television, film preservation, journalistic organizations committed to freedom of speech, as well as organizations that support natural disaster relief and other international and humanitarian crises such as the International Rescue Committee (IRC), FilmAid International, The Kailash Satyarthi Children’s Foundation, and Refugee and Immigrant Center for Education and Legal Services (RAICES).