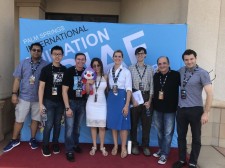 Animators on the spectrum joined Oscar-, Emmy- and Grammy-winning artists to present four animated shorts at this year's Palm Springs International Animation Festival. Exceptional Minds shorts were among the 250 that made the cut, out of more than 2,700 PSIAF submissions overall.

Exceptional Minds artists with autism joined Oscar-, Emmy- and Grammy-winning artists from around the world to present four uniquely creative and original animated shorts at this year’s PSIAF held at Palm Springs Convention Center Aug. 22-26. The four were among only 250 that made the cut, out of more than 2,700 PSIAF submissions overall.

There is a huge renaissance in animation right now, which is ironic because the autism population, often underemployed, is a growing population, and many of these individuals seem to be especially good at it.

“This population seems to be a natural fit for animation. A lot of those with autism understand at a very gut level this idea of a parallel universe that is similar, but quirkier, to our reality, and they are able to develop unique animated content based on that imaginary world,” said Howie Hoffman, the creative director for Exceptional Minds animation studio, the first and currently only working studio of its kind in the country.

The Exceptional Minds Studio employs animation and visual effects artists, all of whom have graduated from the Exceptional Minds vocational school. The animation studio has completed 2D animation projects for a number of high-profile organizations, including the Los Angeles Zoo, Sesame Street Foundation, NPR composer BJ Leiderman, the Netflix show "Atypical" and Special Olympics, which commissioned the PSIAF-selected "Special Olympics: Inclusion Revolution" for their 2018 Special Olympics inclusive health initiative.

“There is a huge renaissance in animation right now, which is ironic because the autism population, often underemployed, is a growing population, and many of these individuals seem to be especially good at it,” said Susan Zwerman, Exceptional Minds Studio executive director.

In addition to the working animation studio, Exceptional Minds graduates have gone on to internships and/or employment at Cartoon Network, Nickelodeon and Warner Bros. and to work on visual effects for movies such as Star Wars: The Last Jedi and Black Panther.

The animation studio has a crew of 11 artists on the autism spectrum and recently added on a 1,561-square-foot facility thanks to a grant by the Hollywood Foreign Press Association.

More than 500,000 U.S. children impacted by autism will enter adulthood during this decade, with one in 59 children to follow. The vast majority of adults with autism are unemployed or underemployed. Young adults with autism have the lowest employment rate of all individuals with disabilities.