Monday marked the end of formal training for eleven young adults on the autism spectrum and the beginning of their professional careers in the competitive fields of animation and/or visual effects.

SHERMAN OAKS, Calif., June 13, 2018 (Newswire.com) - ​They spoke of vision and heart at Monday’s commencement for 11 young adults with autism who have completed their formal training at Exceptional Minds vocational school.

Addressing the family and friends gathered for the event, actress Jane Seymour spoke of how the unique school and working studio captured her heart when she first toured it months ago. “Exceptional Minds started as an idea in a one-room schoolhouse, and what you see today, the fifth graduating class of Exceptional Minds, is extraordinary,” said the Emmy® and Golden Globe® award-winning actress known for her roles in the James Bond film Live and Let Die and the television series Dr. Quinn, Medicine Woman.

It takes heart to make this happen.

“It takes heart to make this happen,” she said.

Later, keynote Ernie Merlán offered several classic graduation quotes to inspire the class about to enter the competitive fields of animation and visual effects. “Here’s one that I am having some trouble with: ‘If you find a job you like, you’ll never have to work a day in your life.’ I don’t know if I agree with that,” said the Exceptional Minds Executive Director to a cheering audience. "Chasing your dreams is hard work," he added. Merlán will be stepping down as Exceptional Minds’ Executive Director as of June 29 to pursue his dream of creating murals with disadvantaged artists throughout the Los Angeles area. During the graduation, Seymour presented him with the Exceptional Minds Open Hearts award for his role in growing Exceptional Minds from a one-room classroom to a thriving multi-million dollar nonprofit with several programs that have served more than 600 individuals with autism in seven years.

The 2018 graduating class made up of ten young men and one young woman “is the most professionally prepared class we have produced,” said Exceptional Minds Program Director Benjamin Maixner. Graduates of Exceptional Minds complete a three-year vocational program preparing them for careers in visual effects and animation.

“I am a completely different person than when I first arrived. Not only did my art and animation skills improve exponentially, but I’m now a lot more social ... I’ve made good friends here,” said graduate Jacob Lenard who will begin his career in animation as an intern at Warner Bros. following Monday’s graduation. He joins nine previous graduates currently employed outside of Exceptional Minds at professional studios. Several students also begin summer internships at Warner Bros., Cartoon Network, Nickelodeon, Kappa Studios and Psychic Bunny. Others from the Class of 2018 will begin their careers in the Exceptional Minds Studio, which is located in the same building as the school, providing graduates with paid work experience in 2D animation, rotoscoping, green screen keying, simple compositing, object removal, tracking marker removal, and end title credits. A new 1561-square-foot animation studio was added this month for incoming graduates, who will join 14 other Exceptional Minds artists in the in-house studio.

Since the studio opened four years ago, it has completed visual effects and/or end title credits for more than 50 productions for Marvel Studios, Sony Pictures, HBO, 20th Century Fox, Paramount, Universal, Warner Bros. and Industrial Light & Magic, as well as animation for the Special Olympics and the Los Angeles Zoo.

During Monday’s graduation, the students and staff awarded Mitsubishi Electric America Foundation (MEAF) with its Exceptional Minds Hero Award. Mitsubishi Electrics’ Executive Vice President and COO Michael Corbo accepted the award on behalf of the foundation, which has provided much-needed funding for the school’s work readiness program critical to young students such as Jacob Lenard who are preparing for careers in the industry. “Our foundation’s vision is to support organizations that empower youth with disabilities to ‘achieve their possible.’ Exceptional Minds does that and more,” said Corbo.

“Thank you, Mr. Corbo and Mitsubishi Electric America for your commitment and support of Exceptional Minds. We wouldn’t be where we are today without the support of our amazing Exceptional Minds community,” said 2018 graduate Nathan Folsom. Also recognized were Adobe, Bob Stevenson and Neil Young, who provided the initial seed funding to start the school.

Exceptional Minds opened its doors in 2011 with a first-year class of nine students. An estimated 90 percent of young people with autism are under or unemployed.  More than a half-million individuals with autism will enter adulthood in the next decade, the vast majority of whom are ill-prepared for meaningful employment. 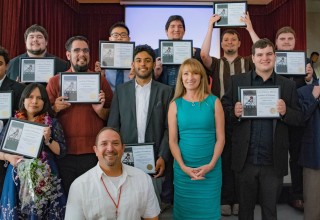 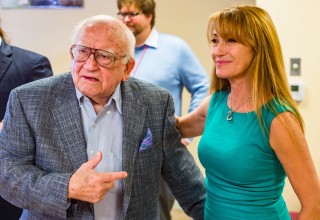 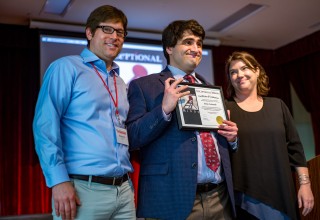 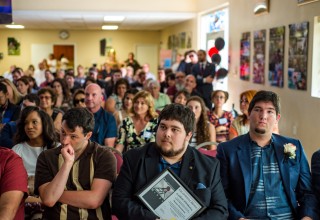